Lisa Rasmussen, formerly Lisa Raphael, has had enough of her manipulative abusive husband. He has forced her to his will, tortured her both physically and psychologically, and she wants out. Her sham of a marriage to Albert, son of the blue blooded Rasmussen’s of Manhattan, has to end. But, Albert has vowed to never give Lisa her freedom. He owns her. Body and soul. Her plans to blackmail him to get out, will not go unpunished. Albert will strike first.
Gio Marino knows Lisa. He knows of Albert. After all, Lisa left him to marry the son of the luxury classic car dynasty. So when Lisa calls him begging for help, he is floored. Not only because she called him, but because of what she has been accused of. Attempted murder! She had meant everything to him, but after what she did nearly a decade ago, he knows not to trust her, but the temptation to see her in an orange jumpsuit is just too hard to resist.
Lisa is full of regret. She has a lot to feel guilty about. But, she doesn’t have any one else to turn to. She needs Gio. He is the only one she can trust even though he might never be able to trust her again.
The minute he walks into Riker’s and sees her, he knows he has made a big mistake. The emerald eyes, the flawless skin, the fiery hair, bring it all back. Especially the regret. Can he help her? Does he want to? And why, after all these years, does he find her beauty so hard to resist?
Beautiful Regret is the third book in The Bounty Hunters - The Marino Bros.
Suspenseful, erotic, and romantic, these books are packed with passion, sex and characters you will love. What more could you want? 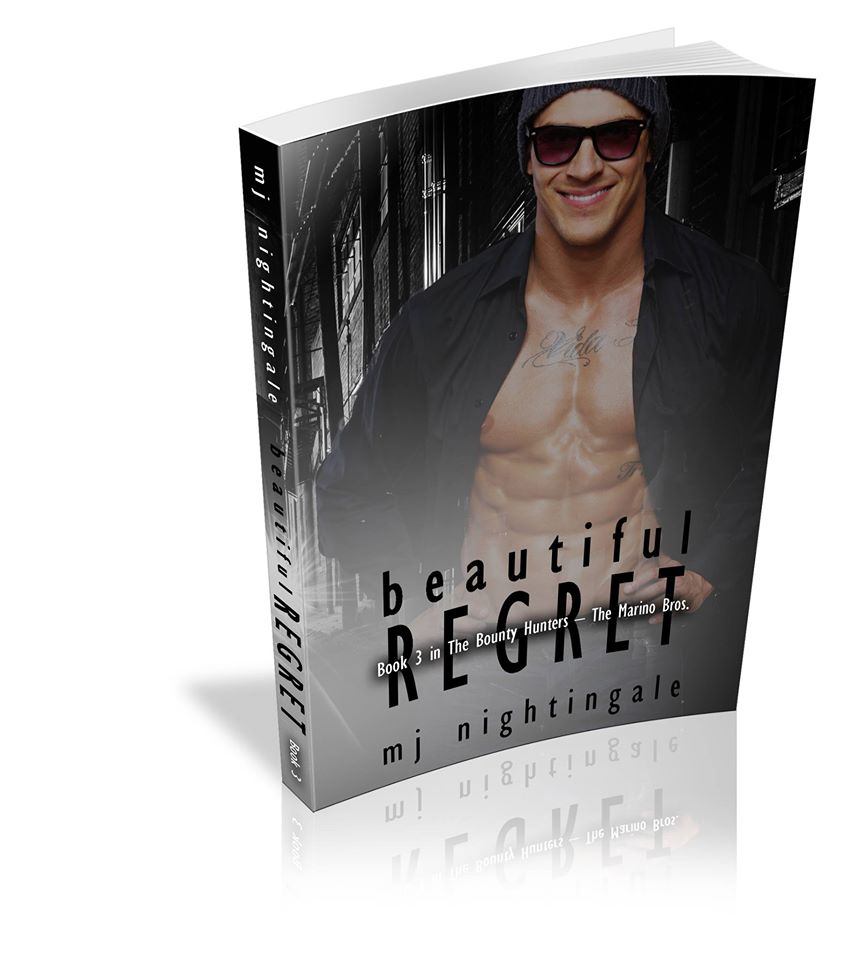 
The old man dropped his hand from Gio’s arm, and looked wistfully up the block towards his own house, just eight up from Gio’s.
“I used to watch her, Lisa, run to your house every day, in high school. She was in love you know. Back then, I thought it was a passing fancy.” He closed his eyes at the memory. “I remember her telling me she was going to marry you one day. She was fourteen when she said it, and I laughed. Then you kids had all those fights, and I took them so seriously. You boys, good boys, I know that now, but you had your share of scrapes in the neighborhood. I was a father of all girls. What did I know? I worried. I heard stories. But I didn’t keep in mind that you were just kids.”
“Sir, I don’t understand what you are trying to say?” The old man was rambling and Gio knew he was trying to make a point. He wanted to move him along.
“I should have never allowed her to marry that man. I should have not even considered it. But I was going to lose everything, and the Rasmussens, I owed them too. They were a good family I thought, so rich, respected. When Albert’s father approached me, it was a business deal. I did not think. I thought it was a step up, but I was wrong. I saw bruises on my daughter’s arms once and I almost killed myself.”
Gio stood back, shocked, and the old man’s words grew harsher. He was practically spitting the words out. Still he remained silent hearing the man out.
“That was about two years after Lisa married. But Celia, I could not tell her. I was mortified, and so ashamed. I am not a man. Then as Johnny grew up, and I recognized he was your son . . .”
“You knew?” Gio interrupted.
“How could I not? I watched you grow up son, and I was even more ashamed of myself.” He went on. “I never spoke my suspicions out loud. Celia, she was mad enough already at me for my gambling. To know her daughter was married to a man who beat her, had the son of her former lover, who she still yearned for, but had done this to keep a house over our heads, that was enough to bear. I could not tell her my suspicions.” The man held his hand up to his heart.
Gio was afraid the man would have a heart attack. He had to stop him. “Mr. Raphael. We all have our regrets. I have mine too. I know I wasn’t perfect. I made mistakes.” He sighed trying to think of what to say next. “I think we all need to just put the past behind us. Focus on the here and now.” He looked towards his house, where Lisa and Johnny played and laughed inside with family, and something clicked inside him. “We have all lived our lives for too long with regret. I think we need to stop regretting the past, and move on. What do you say?” he held out his hand and Mr. Raphael took it with tears in his eyes.
“Son, thank you. That would mean a lot. As many mistakes as we, I, have made, that would do my heart good. I love my daughters and my grandson. Your son. I am glad he is yours.”
“He is a fine boy. I’m glad too.”
“And son, one more thing.” He took hold of Gio’s arm once more as he was about to turn and head back inside. “You say you were not perfect, but you are. Perfect for my Lisa anyhow. I wish I had seen that earlier.”
The old man was smiling at him with tears still in his eyes. “You old fool,” Gio swiped the tears that had sprung from his own eyes, and pulled Mr. Raphael into his arms, and gave him a quick hug. The man was crying and laughing at the same time.
“Let’s get inside. I miss my family.”
“I do too, son. I do to.” 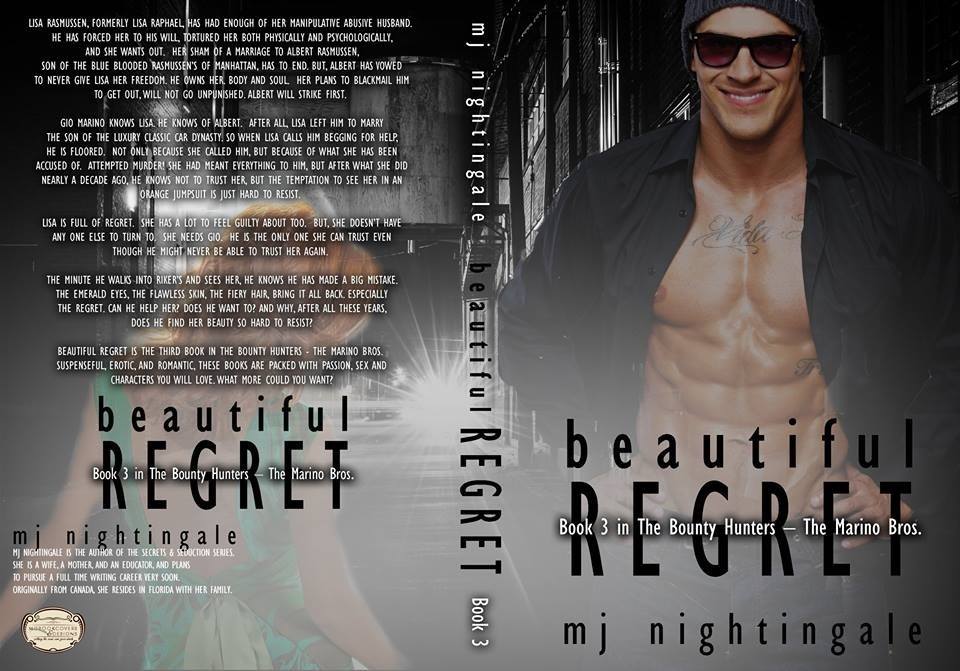 The more I read these books the more I fall in love with the Marino brothers. Gio was the jokster of the family and with good reason you can understand why. It was good to finally see what happen with Gio to make him the way that he was. I love digging into these guys and learning the back story to each one. This book kept my attention from the very beginning and this was a book that kept me wanting more. The one thing that i can say that set this book aside from the first two is that the main characters already knew each other from the past and that had a major impact on them. There is never a dull moment in this series and Beautiful Regret proved that point. I look forward to reading the next book in this series and seeing what will happen with the last brother. 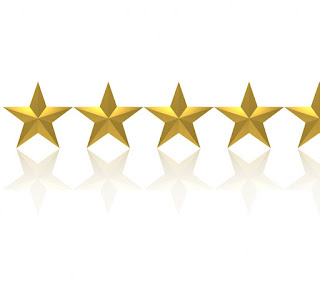 
MJ Nightingale has been a teacher for over two decades. Writing is her new career, and something she has wanted to do for a very long time. But reading has been a part of her life since she was a child. She has been an avid lover of romance novels, and they have always held a special place in her heart. When not working, or writing, or spending time with her children, she devours books all summer long, and any type of fiction; thrillers, crime, suspense, contemporary, and drama.
She has published seven novels, all contemporary erotic romance with elements of action and suspense. She currently lives in Florida with her wonderful husband, and sons. And, she loves to hear from her readers.
Follow her on Amazon to get all the latest on her upcoming new series; Mystic Nights. Five new romantic suspense books that follow Tawny Sassacus and her children who help her to run Mystic Casino Nights.

Goodreads:
https://www.goodreads.com/author/show/7340874.M_J_Nightingale
Posted by Unknown at 8:00 AM