I'd given Gavin everything, including my trust, and I'd thought we'd worked past our problems here in Cannes. Then I saw him kissing Alizee… The trip to France that was supposed to bring them closer together keeps tearing Carrie and Gavin apart, this time thanks to Alizee Padovani. Carrie wants the lies to stop, but when her journalist friend, Pierre, tells her she can't confront Gavin without putting innocent lives in danger, she finds herself caught in a web of deceit. What she doesn't know is that being quiet might be just as deadly. Everything comes to a head for Carrie and Gavin in the final installment of M.S. Parker's exciting French Connection series. You won't want to miss it!

When my attempt at a date ended disastrously and Cade has come to my rescue again, I wondered if, maybe there was something more between us than business. Or was it just wishful thinking? Bree Gamble is following the directions from her teacher, Cade Shepard, but things don’t go exactly as planned. Cade’s rescue leads revelations about his past, things that make Bree fear their arrangement is about to end because of rule number one. She can’t deny the attraction she has beyond physical and, now, she believes there’s a possibility that Cade feels the same way. Will they trust each other enough to confess their true feelings, and if they do, will it all end with them each going their separate ways?

I thought I could handle this business arrangement. It was what I'd wanted, after all. Someone to teach me how to be the kind of woman every man desired. Every man, that was, but one. When Bree Gamble agrees to let escort Cade Shepard mold her into a beautiful, confident woman, she tells herself that it's business, nothing more. A transaction between consenting adults. Sex with no emotional strings attached. Exactly what she needs after the disastrous end to her previous relationship. As things with Cade progress, however, she is forced to admit that she's starting to fall for the handsome gigolo. Will Bree be able to keep her feelings hidden or is her relationship with Cade doomed? Find out what happens next in the third Casual Encounter installment by best-selling author M.S. Parker.

When I found out that Cade Shepard was my white knight, I let myself believe that I could fall in love again. And then I realized that everything had been a lie. Twenty-five year-old Bree Gamble feels betrayed by her best friend after discovering that the man she thought could help her get over her broken heart is nothing more than a paid escort. But Cade surprises her. He shows up at her door with an apology and a proposal. He offers to teach her how to become the kind of woman that no man will ever be able to refuse. He just has one rule: She can’t fall in love with him or the deal is off. Will Bree give in to the temptation and risk losing her heart in the process? The second installment of Casual Encounter by best-selling author M.S. Parker is a must-read seductive roller-coaster.

My wedding day was supposed to be the happiest day of my life. Instead, my heart was shattered into a million pieces. When twenty-five year-old Bree Gamble was left at the altar by her long-time boyfriend, she isn't sure where she's supposed to go from there. Her friends try to help by setting her up on blind dates, telling her she needs a casual encounter to move on. Then a mysterious stranger comes to her rescue and Bree thinks that maybe she's met the one person who can help heal her broken heart. What she doesn't know is that her handsome hero isn't the white knight she imagines. Don't miss the first installment in the Casual Encounters series, the latest by best selling author M.S. Parker. 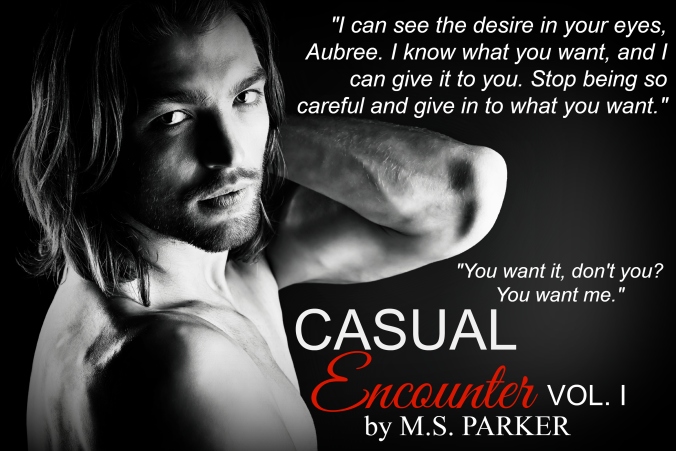 M.S. Parker is a USA Today Bestselling author and the author of the Erotic Romance series, Club Privè and Chasing Perfection.
Living in Southern California, she enjoys sitting by the pool with her laptop writing on her next spicy romance. Growing up all she wanted to be was a dancer, actor or author. So far only the latter has come true but M. S. Parker hasn't retired her dancing shoes just yet. She is still waiting for the call for her to appear on Dancing With The Stars. When M. S. isn't writing, she can usually be found reading- oops, scratch that! She is always writing.